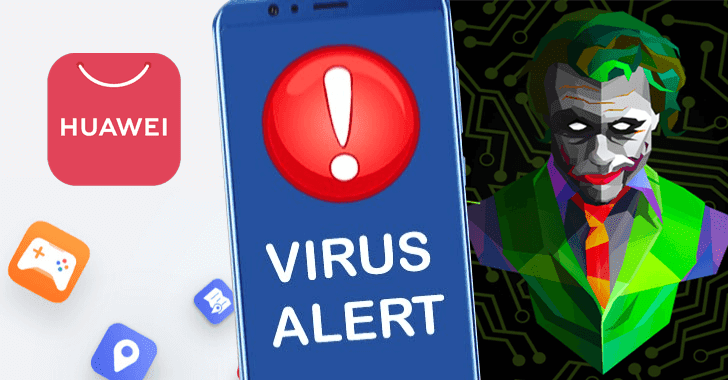 In a report,  Doctor Web’s analyst has pronounced that they have recently found Joker Android Malware, identified as multifunctional Trojans of the Android, in the official app store for Huawei devices, AppGallery.

The Joker family encourages Android users to pay for all the mobile services, and according to the report, over 500,000 Huawei smartphone users have downloaded the infected apps from the company’s official Android store.

The Android apps that were being downloaded were all infected with Joker malware that provokes the users to subscribe to the premium mobile services.

More than 500,000 Huawei smartphones were infected by the Joker Android Malware, and the security analysts have asserted that all the infected devices are continuously providing the feature.

Not only this, even all the infected devices have also downloaded various malicious elements, which enables the operators of the malware to enforce the users to pay for the premium services.

The hackers have tried all the methods to keep the users in the dark so that they won’t get exposed. The users were kept in the dark regarding the infected apps, which demanded access to notifications.

Even the infected apps also allowed them to block confirmation codes that are specifically being delivered over SMS by the subscription service. However, the hackers could also modify the limitation of the services at any time.

The operators of Joker malware secretly connects to the control server so that the users can’t understand it and later receives the basic settings and downloads one of the supplemental components.

But, the worst part of this malware is that it hunts for activation codes but also conveys the contents regarding all kind of notifications about incoming SMS to the attacker’s server.

Later this notification leads to leakage of confidential data, which will eventually become the worst situation for every user. After detecting all the applications that were affected by this malicious malware, Doctor Web notified Huawei regarding the affected apps.

Once Huawei gets the notification regarding the affected app, the company immediately removed the apps from AppGallery.

Moreover, the cybersecurity experts from Dr.Web affirmed that this is not the first time, as Joker has also attacked before. The analysts found such malicious Android malware a few years ago in a scheme of Premium SMS messages.

Now, as the days are passing, Joker is becoming more powerful; that’s why now it’s spreading with a great force. Till now, nearly 1700 applications have been deleted from the Play Store just because of such malicious Android malware.