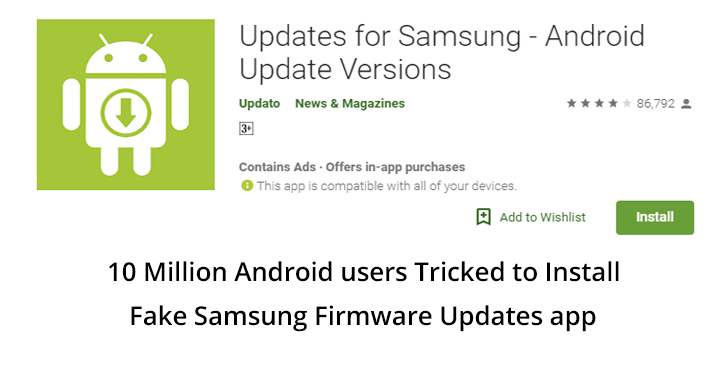 More than 10,000,000+ users tricked to download a fake app “Updates for Samsung” from the official Google play that is not affiliated with Samsung for distributing firmware.

The fake app exploits the complexity in finding the firmware updates for Samsung phones and using them for generating easy money.

Aleksejs Kuprins from CSIS Security Group published the report on the malicious behavior of the app; he also reported the fake app to Google Play.

The app manages to trick the users believing it as an official application store for getting firmware updates for Android devices. It renders a blog updato[.]com that contains android related news and tutorials.

Users are allowed to search for their specific firmware version, and then app offers paid subscriptions to download the firmware. For an annual subscription, users need to pay $34.99, and the app does not use google subscription; instead, the payment was processed through updato[.]com API.

The screenshot indicates a free download option but “the download rate is limited to 56 KBps,” which tempts the user to make payment and to go for a premium package.

Aleksejs noted that “the app claims to offer SIM card unlocking for any network operator, starting at $19.99. Also not via GooglePlay subscription.”

“Although not malicious in the traditional meaning of that term “Updates for Samsung” does not seem to offer users much of value besides a lighter wallet and as such highlights the risks of ignoring the fine print.”

Users are recommended to use Samsung update feature that exists under settings >> Software update, instead of believing in shady apps. Most of the app reviewers indicated that the app is full of ads, buggy and even it freezes the phone.