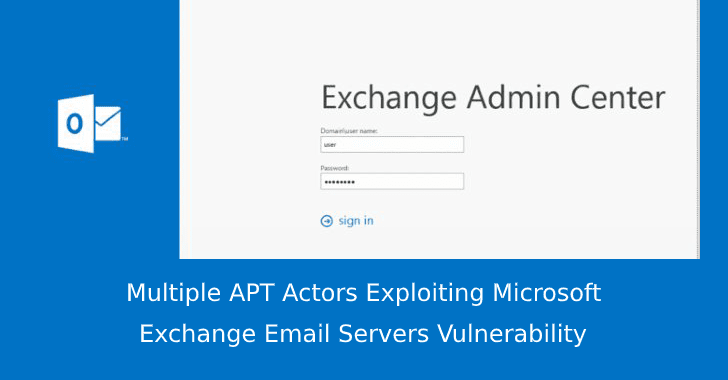 Multiple APT actors attempting to exploit recently patched remote code execution bug in exchange email servers. The vulnerability can be tracked as CVE-2020-0688. It affects all versions of the exchange server.

The bug resides in the Exchange Control Panel (ECP) component, which can be used to manage mailboxes, Distribution Groups, Contacts at the mailbox level and several other objects at the Organization level.

The vulnerability allows attackers to gain access to Exchange servers in an organization with a simple user login credentials or by using an old service account.

According to Microsoft the bug was due to a memory corruption vulnerability and could be exploited by an attacker by sending a crafted email sent to a vulnerable Exchange server.

The flaw resides in the Exchange Control Panel (ECP) component which fails to properly validate the unique keys at install time.

“Knowledge of the validation key allows an authenticated user with a mailbox to pass arbitrary objects to be deserialized by the web application, which runs as SYSTEM.”

“The nature of the bug is quite simple. Instead of having randomly-generated keys on a per-installation basis, all installations of Microsoft Exchange Server have the same validation key and decryption key values in the web.config,” reads Zerodayinitiative.

An attacker could place malicious files and tools in any number of places, mostly attacks start by placing a web shell on Exchange servers.

Users are recommended to update the credentials at regular intervals and to enable 2FA which may prevent the attack from being successful.