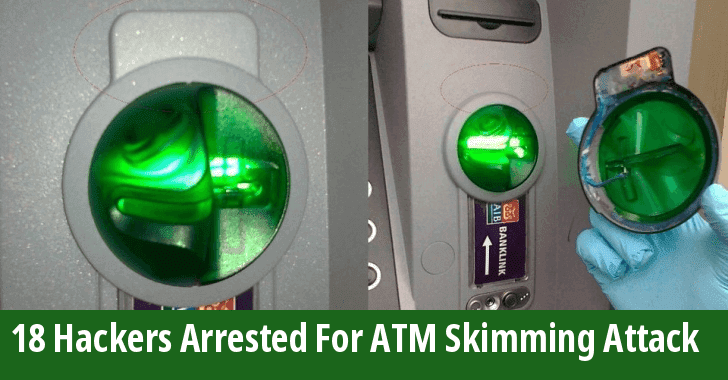 U.S law enforcement agencies arrested 18 International Fraud members who were allegedly committed with the various cyber crimes and stolen tens of millions of dollars from financial institutions and individual victims.

Geoffrey S. Berman, the United States Attorney from Newyork unsealing of indictments against the 18 members who have committed with a variety of crimes, including access device fraud, wire fraud, bank fraud, and aggravated identity theft.

These hackers were involved with wide-ranging international ATM skimming and money laundering operation and have stolen more than $20 Million through hundreds of ATM skimming operations across the U.S including 17 different states.

They were installing the skimming devices on ATMs, removing those devices, and cashing out large numbers of fraudulent debit cards manufactured and the defendants worked directly in this skimming attack.

Skimming devices and component parts were imported from different countries and deployed in ATMs to record the debit card numbers and personal identification numbers when the victims enter their details, and then used those cards to fraudulently withdraw cash from victims’ bank accounts.

“Other defendants assisted in engineering the skimming devices that the Skimming Organization used.  Still, other defendants laundered the proceeds of the skimming attacks through bank accounts, properties, businesses, and the transportation of bulk cash.”

NYPD Commissioner James P. O’Neill said:  “The NYPD and its law enforcement partners are committed to dismantling criminal enterprises that leverage attacks against our cyberinfrastructure.  We comprehensively confront everything from highly-sophisticated transnational groups, like this one, to those criminals who exploit our citizens with cyber-enabled scams.

All the members were arrested with the help of FBI, CBP, and the NYPD,  INTERPOL-Rome, INTERPOL-Mexico City.