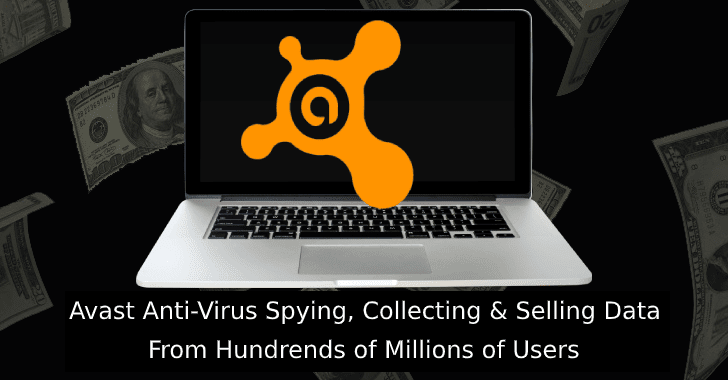 Anti-virus software firm Avast reportedly spying hundreds of millions of Users browsing activities including, every click, every purchase you made online, and selling the collected data into various clients that include Home Depot, Google, Microsoft, Pepsi, and McKinsey and many other companies.

Avast is one of the leading security firms with more than 435 million active users per month, and well known for offering Free Anti-Virus software.

The report claims that Avast has collected data from hundreds of millions of users, and then gives that to Jumpshot, a subsidiary of Avast that’s been offering access to user traffic from 100 million devices, including PCs and phones.

In return, these companies are paid millions of dollars for Jumpsuit products such as “All Clicks Feed,” which tracks user behavior, clicks and other behavior on the internet.

Jumpsuit offers different products that collecting users’ activities data in different ways, for example, a product that focuses on providing the searches that people are making, including what keywords used and which results that were clicked.

Evidence of these activities shows that Avast also collecting through Jubmsuit including, sensitive searches for pornographic related activities such as underage sex.

“Jumpsuit also offering the data based on the price and how much they are paying for them and supply the URL string to each site visited, the referring URL, the timestamps down to the millisecond, along with the suspected age and gender of the user, which can inferred based on what sites the person is visiting,” PCMag said.

If you install Avast or AVG products, it throws a popup and asks users that ”  “Mind sharing some data with us? ” and it tells you that the collected data will be de-identified and aggregated as a way to protect your privacy.

But there was no clear information that how the same data can be combined with other information to connect your identity to the collected browser history but users always believe that it will protect their privacy.

Avast response this allegation and says that it was stopped sharing the data collected by these extensions to Jumpshot, but the documents say that the data collection is ongoing.

But not through the browser software extension instead, Avast committing massive data collection via its free anti-virus software.

” Despite Avast currently asking users to opt back into the data collection via a pop-up in the antivirus software, multiple Avast users said they did not know that Avast was selling browsing data.”

Journalists contacted the companies that purchased data from Jumpsuit, in response, those companies use information from third-party providers to help improve our business, products, and services.

Jumpshot gave access to Omnicom, a marketing company all click feeds from 14 different countries around the world, including the U.S., England, Canada, Australia, and New Zealand. Omnicom did not respond to the question regarding these activities.

In this case, Microsoft has strongly declined why they have purchased these collected data and also said that they don’t have a current relationship with the company.

Avast declined to answer for so many questions and said that “Because of our approach, we ensure that Jumpshot does not acquire personal identification information, including name, email address or contact details, from people using our popular free antivirus software.” Motherboard said.