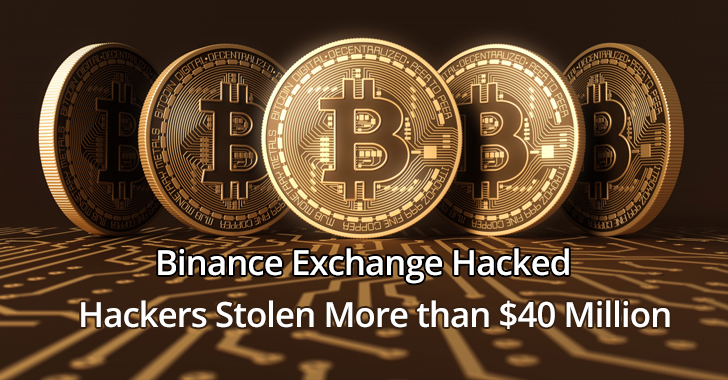 Binance hacked, hackers, stolen 7,000 Bitcoin that worth more than $40 Million using a variety of attack methods that include phishing, viruses, and other attacks.

By using the hacking methods, they obtain a large number of user API keys, 2FA codes, and potentially other info to withdraw BTC from the hot wallet.

Hackers withdrew 7,074 BTC in one transaction, and it has been split with multiple accounts, here is the blockchain information.

According to the company, this is the only transaction affected, “it impacted our BTC hot wallet only (which contained about 2% of our total BTC holdings). All of our other wallets are secure and unharmed.”

Hackers followed sophisticated methods to bypass the security checks placed by Binance, and the company was unable to stop the withdrawal before it was executed.

“Once executed, the withdrawal triggered various alarms in our system. We stopped all withdrawals immediately after that,” reads Binance press release.

Binance said that the loss would be covered by using Secure Asset Fund for Users and none of the user funds has been affected.

“We must conduct a thorough security review. The security review will include all parts of our systems and data, which is large. We estimate this will take about One week.”

At the time of the security review, all the deposits and withdrawals remain suspended. “We beg for your understanding in this difficult situation, ” reads Binance press release.