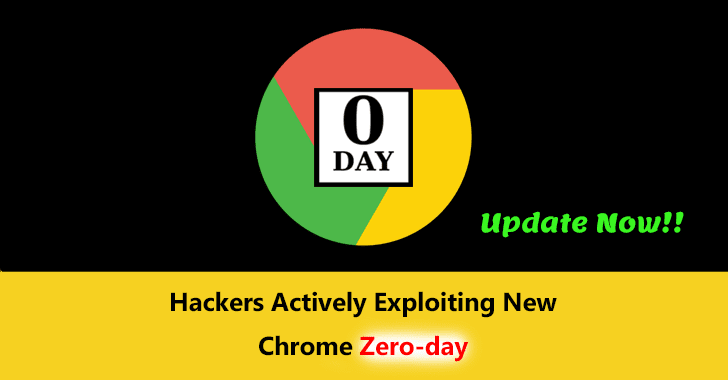 This is an emergency notice for all Chrome users!!!

Google released an emergency update for Chrome that patches two new use-after-free vulnerabilities which include a zero-day bug that is actively exploiting in wide.

Researchers from Kaspersky discovered an unknown zero-day exploit for chrome browser and they called it as operation WizardOpiu.

Threat actors who behind this attack is unknown, but the code similarities indicate that the attack possibly linked with Lazarus group, an unknown team of hackers who are using Zero-days, spearphishing, malware, backdoors to attack various financial organization around the world.

The use-after-free vulnerability (tracked as CVE-2019-13720) affects the audio component of the web browser and the bug has been reported by Anton Ivanov and Alexey Kulaev at Kaspersky Labs.

Another use-after-free vulnerability has been uncovered as CVE-2019-13721 and fixed in this update which was reported by bug hunter bananapenguin. Google rewarded a bounty of $7,500.

The use-after-free vulnerability is a type of memory corruption flaw that allows an attacker to corrupt memory to escalates the privilege and take over the complete control of the vulnerable system by executing the arbitrary code remotely.

Researchers initial uncovered a malicious activity that leverages the waterhole type injection in the Korean site where the attacker inserted a weaponized javascript code on the main page.

The Javascript code load another remote script from the website hxxp://code.jquery.cdn.behindcorona[.]com and drops the anther script .charlie.XXXXXXXX.js that check the victim’s browser’s user agent to ensure that the system is vulnerable to infection and also it tries to extract the browser name and version.

Later the malicious javascript establishes a connection to the remote server and downloads the bunches of chunks of the exploit code.

Once its all downloaded then the RC4 script decrypts the chunks where the attacker receives the new JavaScript code containing the full browser exploit.

Downloaded browser exploit is completely obfuscated and the researchers de-obfuscate and uncovered that it has made another request against the user agent’s string and the second time it checks that the browser version is 76 or 77.

Researchers believe that “It could mean that the exploit authors have only worked on these versions (a previous exploitation stage checked for version number 65 or newer) or that other exploits have been used in the past for older Chrome versions.”

According to Kaspersky research ” The exploit used a race condition bug between two threads due to missing proper synchronization between them. It gives an attacker and a Use-After-Free (UaF) condition that is very dangerous because it can lead to code execution scenarios, which is exactly what happens in our case. “

Trigger the Use After Free Vulnerability

Once the exploit found the vulnerable victims, it immediately tries to trigger the UAF to perform an information leak about important 64-bit addresses.

It causes the following result to the attackers:

1) if an address is leaked successfully, it means the exploit is working correctly;
2) a leaked address is used to know where the heap/stack is located and that defeats the address space layout randomization (ASLR) technique;
3) a few other useful pointers for further exploitation could be located by searching near this address.

Along with this operation, it tries to perform various other processes such as allocate/free memory and bunches of other operations give the attackers to read/write an arbitrary code and take the complete control of the system.

The patch has already availed for all platforms such as Windows, Mac, and Linux. We recommend all the chrome users to immediately update the browsers and apply the patch to prevent this attack.