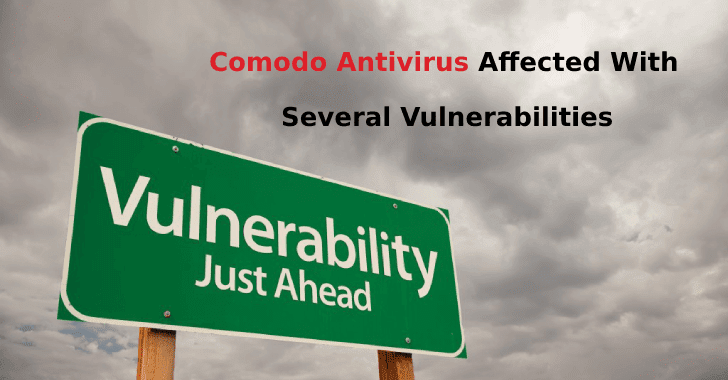 Researchers discovered five critical vulnerabilities in Comodo Antivirus / Advanced version. Out of five vulnerabilities four present in version 12.0.0.6810 and one with 11.0.0.6582.

The vulnerabilities discovered at Tenable by David Wells, these vulnerabilities could be exploited by the attacker on the target system by “escaping sandbox as well as a privilege escalation to SYSTEM.”

CVE-2019-3969 – An attacker can gain access to the target system by escaping the Comodo Antivirus sandbox and can elevate the privileges to “NT AUTHORTIY\SYSTEM” system user level.

CVE-2019-3971 – Denial of service flaw resides with CmdVirth.exe, a low privileged user can trigger the vulnerability by sending a LPC_DATAGRAM which triggers access violation due to hardcoded NULLs used for a memcpy source address results in process termination.

CVE-2019-3972 – Out-of-bounds can be caused by modifying the SharedMemoryDictionary structure that results in a possible crash.

CVE-2019-3973 – The Out-of-Bounds Write can be exploited to crash the application components and kernel crash.

David Wells published the PoC code on Github and also a video PoC for the flaw.

” At the time of this disclosure, we are not aware of any patches released by Comodo that address these vulnerabilities. We recommend keeping updated on future Comodo Antivirus releases. “

There have been no reported incidents exploiting any of these vulnerabilities and no customers reporting related issues to us. The Comodo product team has been working diligently to resolve all vulnerabilities and all fixes will be released by Monday, July 29.