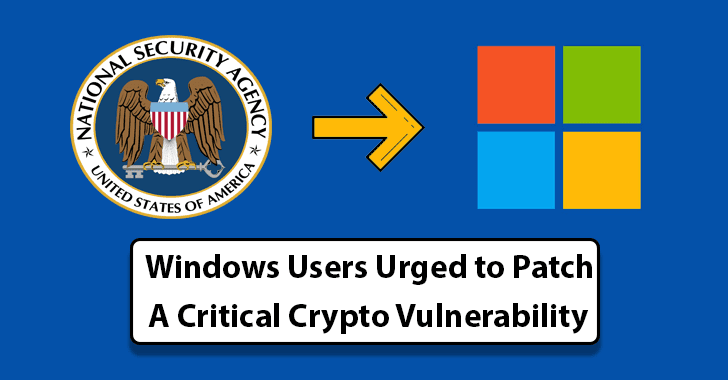 Windows users are recommended to immediately patch the critical Cryptographic vulnerability that existing in the Windows CryptoAPI (Crypt32.dll) that affected Windows cryptographic functionality in Windows 10, client and server.

The vulnerability discovered by the National Security Agency (NSA) and confirmed that this critical bug allows an attacker to perform remote code execution on vulnerable Windows client and server.

This critical bug exploited by an attacker to undermine how Windows verifies cryptographic trust and Validate Elliptic Curve Cryptography (ECC) certificates that enable the RCE to take control of the system.

It affects both Windows 10 and Windows Server 2016/2019 as well as applications that rely on Windows for trust functionality.

Successful exploitation of this vulnerability could allow attackers to break the trust of the network connection and pass the malicious executable code while appearing as legitimately trusted entities.

According to the NSA vulnerability report,“This vulnerability heavily impacts the Windows endpoint users and opens the broad range of exploitation vector. The validation of trust may be impacted include:

Also, hackers might have already started developing remote exploitation tools, which will be later used to target hundreds of millions of Windows users around the globe.

According to the Microsoft report ” An attacker could exploit the vulnerability by using a spoofed code-signing certificate to sign a malicious executable, making it appear the file was from a trusted, legitimate source. The user would have no way of knowing the file was malicious because the digital signature would appear to be from a trusted provider.”

The Cryptographic Vulnerability can be tracked as CVE-2020-0601 and the successful exploitation of the vulnerability allow the attacker to conduct man-in-the-middle attacks and decrypt confidential information on user connections to the affected software.