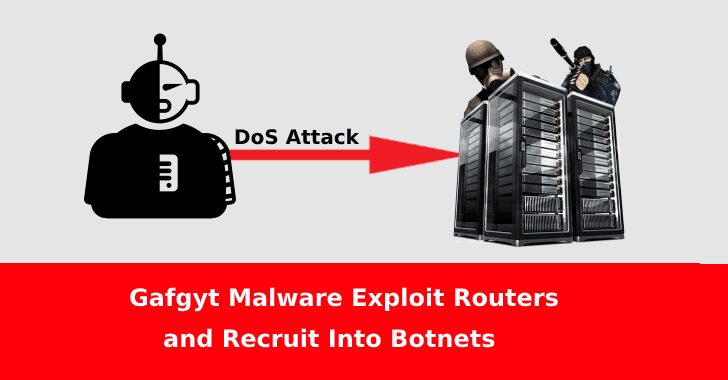 It exploits remote execution code vulnerability in routers to gain access and recruit them to into botnets to attack gaming servers.

According to Unit 42 researchers, there are more than 32,000 WiFi routers are vulnerable to the exploits. It abuses the following vulnerabilities to gain access to the routers.

The Gafgyt malware active since 2014, it is known for conducting large-scale DDoS attack, the malware includes three scanners that exploit the remote code execution vulnerabilities present on the routers.

The exploits crafted as binary droppers, which downloads the binary from the malicious server based on the router type and try to infect them.

The second exploit abuses a remote code execution vulnerability found on HG532 routers. the vulnerability can be exploited by an attacker sending malicious packets to TCP port 37215 to launch attacks.

The Gafgyt malware variant uses different attack types based on the commands received from the C2 server. Following are the commands

The gaming servers are the primary target, “payload is widely used to cause a Distributed Reflection Denial of Service (DrDoS), which involves multiple victim machines that unwittingly participate in a DDoS attack.”

Unit 42 observed that the botnets are advertised on social media such as Facebook and Instagram, and the attackers also have their websites to rent the botnets.

The malware samples and DOS attacks are easily obtained by anyone online by just spending a few dollars.