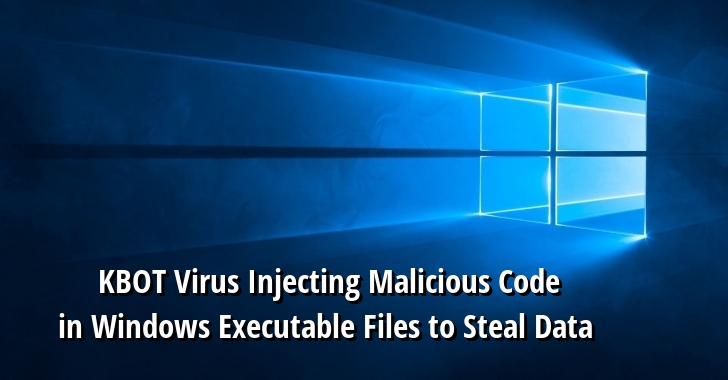 You’re hearing the term “Virus” instead of malware after a long time right!! Yes, what you’re hearing is absolutely right. Researchers discovered a new wave of a malicious campaign named “KBOT” that injecting malicious code into Windows executable files which is also called “Virus”.

They describe it as a living “Virus” in recent years in wide, and its spreading via an infected external drive, local network and the internet to replicates itself by modifying other computer programs using its own code.

How Does KBOT Virus Infect

The process of KBOT virus infection starts aggressively by replicates in a local network and spread quickly into another computer by infecting the executable files without any possibility of recovery.

According to the Kaspersky research, “Like many other viruses KBOT patches the entry point code, where the switch to the polymorphic code added to the start of the code section is implemented. As a result, the original code of the entry point and the start of the code section are not saved. Consequently, the original functionality of the infected file is not retained.”

The KBOT adds the encrypted data (using the XOR method) at the end of the following section  .rsrc, .data, .rdata and the encrypted data contain the body of the main malware module (DLL library), as well as code for decrypting, loading into memory.

Also, it can operate in the context of system applications and attempt to infect the code into the running process.

Attempting to Hijacking the DLL

KBOT malware performs a DLL hijacking attempt to operate in the address space of a legitimate system application by infecting the system binaries when the system boots.

The virus specifically searches for executable EXE files suitable for the attack in the  C:\Windows\\System32, a system folder.

To gain remote access from the compromised system, attackers who behind the KBOT establish reverse connections with the servers listed in the BC.ini file.

The Virus also received several following commands from the C2 server that handing by the attacker.