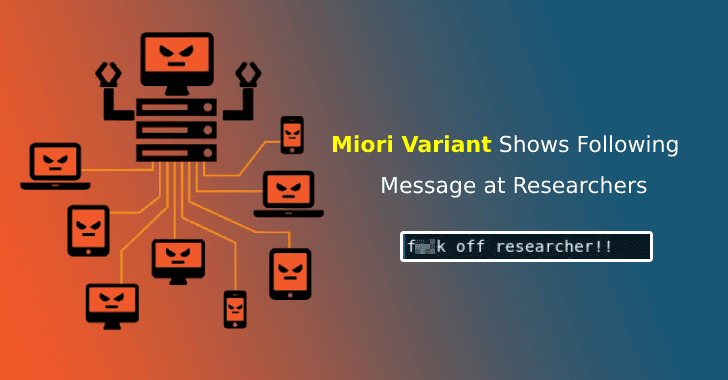 Miori targets IoT devices and exploits them by taking advantage of the vulnerabilities and integrate them to the botnet network to launch various attacks.

Researchers consider this Miori is very similar to the Mirai Malware and Miori developed to infect vulnerable IoT devices and use them as platforms for launching a DDoS attack.

The Miori campaign was observed by Trend Micro researchers used a text-based protocol to establish communication with C&C instead of a usual binary-based protocol.

When the researchers tried establishing a connection with C&C server it displays the following message and terminates the connection, which indicates that “the cybercriminals behind the variant are wary of security researchers’ usual methods.”

Further analysis revealed that the malware uses text-based protocol and the C&C server should receive a specific string to allow anyone to connect if the string doesn’t preset it shows the message and terminate the connection.

“We also discovered that it uses a protocol for receiving encrypted commands, which is not present in older variants. As it waits for these commands, it simultaneously scans for vulnerable telnets hosts to propagate,” Trend Micro reported.

It scans for the vulnerable hosts and sends the IP details to C&C server, later the C&C server sends the malware and executes malicious scripts on the host. Also, the source code has been sold in underground forums for US$110.