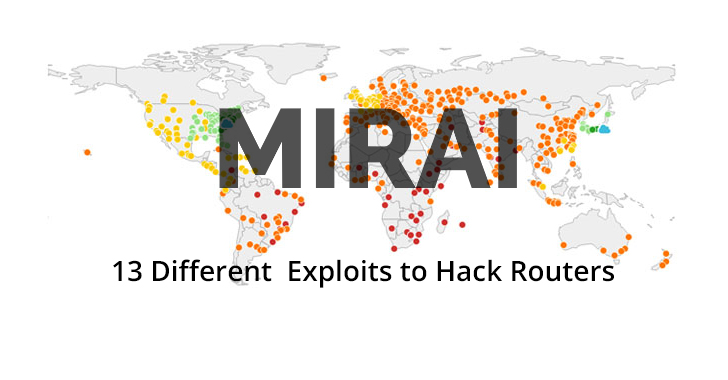 These exploits are associated with this new Mirai variant capable of launching backdoor and distributed denial-of-service (DDoS) attacks.

This is the first time to have used all 13 exploits together in a single campaign including some of the exploits that used in the previous attack.

Initially, the new variant of Mirai found in the honeypot system that deployed by Trend Micro and it looking for the IoT devices to exploit several vulnerabilities that include remote code execution (RCE authentication bypass and command injection.

According to Trend Micro ” It showed that this malware used different means of spreading, and also revealed its use of three XOR keys to encrypt data. Decrypting the malware’s strings using XOR revealed one of the first relevant indicators of the malware’s being a Mirai variant.”

Researchers found different URL’s that is associated with Mirai variant including the command-and-control (C&C) link and download and dropper links.

Mirai Variant associated exploits taking advantage of the different vulnerabilities that found in the routers, surveillance products, and other devices

Among all 13 vulnerabilities, 11 had been already used in the previous Mirai variant campaign in 2018 and other 2 exploits are completely new that can be used against Linksys and ThinkPHP RCEs.

The attacker behind this new variant could have simply copied the code from other attacks, and with it the exploits these previous cases had used.

Users are recommended to change the default credentials in the router to prevent the credential based attacks.