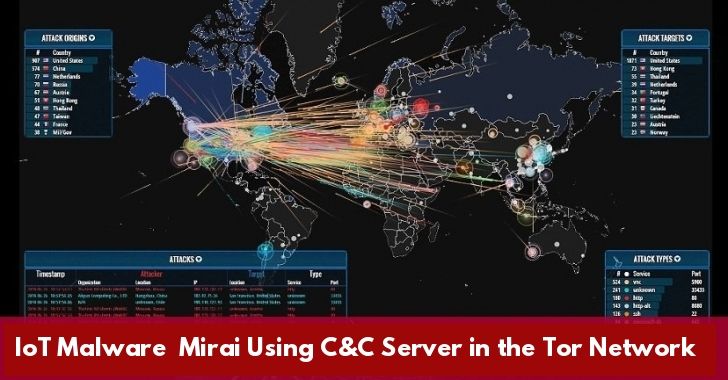 Researchers discovered new Mirai Malware samples with the updated functions, in which malware authors implemented its Command & Control server in the Tor Network for anonymity.

Mirai is one of the notorious IoT Malware that targets the IoT devices such as IP cameras and DVRs to take control of those devices by taking advantages of open ports and default credentials, exploiting disclosed and non-disclosed vulnerabilities and add them in botnet network.

Threat actors placed a command and control (C&C) server in the Tor network that never seen in any of the previous version of Mirai.

Hide the C&C server communication via Tor helps to avoid detection and stop reporting in surface web to take down the C&C server.

A sample that discovered by Trend Micro researcher contains four C&C servers with 30 hard-coded IP address that was isolated by researchers in a sandbox environment.

“Results indicate that it sent a specific sequence of “05 01 00”, a socks5 protocol initial handshake message. Next, researchers sent the message to the servers and got the socks5 response “05 00” from the majority of the addresses, confirming that they were socks proxies to the Tor network.”

Further research reveals that the malware establishes the connection with socks5 and queries it to relay packets to a C&C server using an address nd3rwzslqhxibkl7[.]onion:1356 on Tor and it also tries to connect with other proxies if it failed.

Researchers also compared with an older version by connecting to the C&C using a Tor proxy in a testing environment and the results confirm the same login prompt used in old versions of Mirai.

New Mirai sample scanning the TCP ports 9527 and 34567 to find the unprotected IP cameras and DVRs for remote access and control.

Along with scanning it also sprays the default credentials on infected hosts, and the communication protocols were used by the attackers also used in previous Mirai variant.

Researchers from Trend Micro discovered a DDoS command sent from the C&C server via a UDP flood attack on a specific IP address.

“We find this particular sample interesting for the attackers’ decision to place the C&C server in Tor, likely to evade tracking of its IP address and avoiding being shut down when reported to domain hosts.”  Trend Micro said.

Another distribution server was discovered and the sample is designed to attack large scale networks. “so users and enterprises are recommended to update their network systems and devices with the latest patches and to change default credentials with complex passwords and apply multiple authentication systems to prevent unauthorized access. “