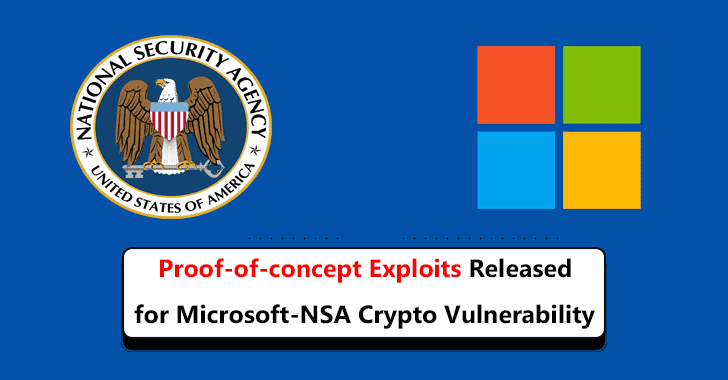 Less than a day after Microsoft disclosed one of the most critical Windows vulnerabilities ever, security researchers have published PoC Exploit that explains how attackers can exploit the Windows CryptoAPI Spoofing bug with cryptographically impersonate any website or server on the Internet.

Microsoft’s January Patch Tuesday security bulletin disclosed the importance – severity vulnerability. It has released a security update to address a broad cryptographic vulnerability that is impacting its Windows operating system.

“Trust mechanisms are the foundations on which the Internet operates — and CVE-2020-0601 permits a sophisticated threat actor to subvert those very foundations.“– says Neal Ziring, Technical Director at NSA.

This is the first time that the NSA has reported a bug to Microsoft, unlike the Eternalblue SMB flaw that the agency kept secret for at least five years and then was leaked to the public by an enigmatic group, which caused WannaCry threat in 2017.

“The root cause of this vulnerability is a flawed implementation of the Elliptic Curve Cryptography (ECC) within Microsoft’s code”. – says security researcher Tal Be’ery.

ECC relies on different parameters. These parameters are standardized for many curves. While the vulnerable Windows versions check three ECC parameters, they fail to verify a fourth, which is known as a base point generator (referred as ‘G’).

This failure is a result of Microsoft’s implementation of ECC rather than any flaw or weakness in the ECC algorithms themselves. Check the detailed analysis by the security expert for more explanation.

There are now a few proofs of concept exploits available on GitHub. The first exploit was published and demonstrated by kudelskisecurity along with a test website for our own purpose[Visit at your own risk]. The website uses a certificate that was “signed” using the PoC exploit.

Another Security researcher Saleem Rashid created a POC code to fake TLS certificates and allows attackers to set up a site that look-like legitimate ones.

Antivirus like CrowdStrikedetects the exploits of CVE-2020-0601 and shows the Certificate Authority, SHA-1 of the malicious certificate, and ECC curve parameters.

There are already detection signatures available from security vendors and even through the Windows Event Manager – CveEventWrite function.

The patch is the only comprehensive means to mitigate the risk. It is highly recommended to install the latest software updates by heading on to,