Doppelgänging introduced in BLACKHAT EUROPE 2017, with Doppelgänging they load and execute an arbitrary as, like a legitimate process, it is similar to Process Hollowing, but it uses NTFS Transactions.

Evasion techniques depend upon the memory manipulation, but researchers here uses windows loader and abuses it to load their code and to evade security scanners.

Researchers said that code would not be saved on the disk resembles like fileless attacks, and it hides from the security scanners and advanced forensic tools.

Doppelgänging works by utilizing two key distinct features together to mask the loading of a modified executable. By using NTFS transactions, we make changes to an executable file that will never actually be committed to disk. We will then use undocumented implementation details of the process loading mechanism to load our modified executable, but not before rolling back the changes we made to the executable. The result of this procedure is creating a process from the modified executable, while deployed security mechanisms in the dark.

Transact – Researchers created a transaction with the legitimate file and then injects the malicious code. Here is the twist we are inside of the transaction, so the changes are invisible.

Load – Session created from the infected file and pointed to malicious executable.

Rollback – Here they rollbacked the changes to the file, but still the section have the malicious code.

Animate – Here they bring Doppelgänger back to life, by creating a process from session object using NtreateProcessEx, so the process looks legitimate, but it runs the malicious code.

They demonstrated with Windows 10 running Mimikatz favorite post-exploitation tool when executed it usually blocked by Windows Defender. So they created a Doppelgänging and mimicat hosted an encryption file with it to evade windows defender. 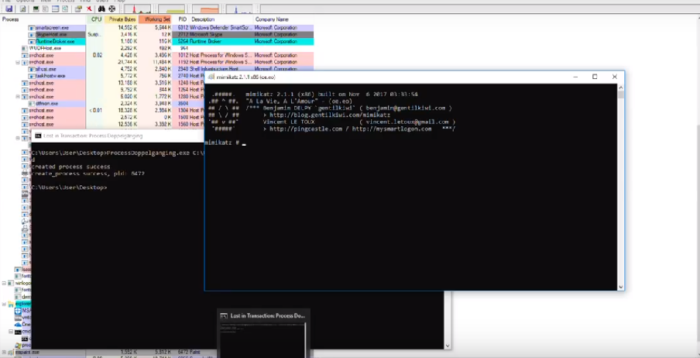 It is hard to patch as Doppelgänging exploiting fundamental and core process of the windows loading mechanism, also it hard for attackers to implement Doppelgänging as it requires a keen understanding of Binaries and process creations.