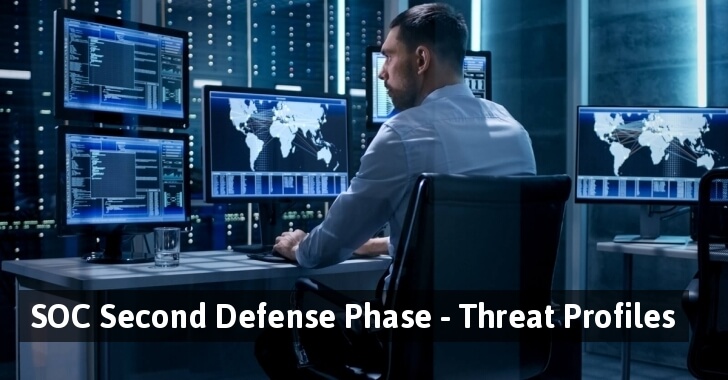 In the first phase of architecturing the SOC, we have seen the basic level understanding of the attacks and necessary steps to breaking the Attack Chain. Let’s move on to the phases of SOC and advanced level of protecting the organization from various Threat Profiles.

Early years, when we say the virus, it’s just an ‘exe’ file with some pop-ups. Most of the viruses created by script kiddies and they don’t cause any damages to any PCs.

But the modern-day malware is not created by script kiddies, but they are developed by companies for profit and there are motives and agenda behind every malware created.

Malware families were grouped into virus/ worm/ PUP/ Spyware/ Adware/ Polymorphic Virus/ FakeAV/ Screensaver Virus. These won’t create much impact or there will be no business motive behind these.

But, nowadays the Threat Profiles & modern malware landscape is huge and wider with unique ways of codings, this malware having in-built capabilities of downloading a further piece of malicious codes, exfiltrate data, communicate outside servers, data erase, encrypt the files and much more.

This modern-day malware is created with agenda, modus, money-minded, etc.

These won’t create much impact or there will be no business motive behind these.

But, nowadays the modern malware landscape is huge and wider with unique ways of codings, this malware having in-built capabilities of downloading a further piece of malicious codes, exfiltrate data, communicate outside servers, data erase, encrypt the files and much more.

This modern-day malware is created with agenda, modus, money-minded, etc.

So, the basic understanding of modern threats becomes necessary for every SOC team. Understanding the threat profiles is much more important in SOC monitoring.

Threat Profiles are the types of the malware/scripts/vulnerable abused applications/ Network & windows Artifacts used by the cybercriminal (Threat Actor) to accomplish their cyber attack on your organization.
These capabilities can be classified as:

1.) Initial Access – Attackers use to gain an initial foothold within a network.

2.) Execution – Execution of adversary/attacker-controlled code on a local or remote system. This tactic is often used in conjunction with initial access as the means of executing code once access is obtained, and lateral movement to expand access to remote systems on a network.

3.) Persistence – Persistence is any access, action, or configuration change to a system that gives an adversary a persistent presence on that system.

Adversaries will often need to maintain access to systems through interruptions such as system restarts, loss of credentials, or other failures that would require a remote access tool to restart or alternate backdoor for them to regain access.

4.) Privilege Escalation – Privilege escalation is the result of actions that allows an adversary to obtain a higher level of permissions on a system or network. Certain tools or actions require a higher level of privilege to work and are likely necessary at many points throughout an operation.

Adversaries can enter a system with unprivileged access and must take advantage of system weakness to obtain local administrator or SYSTEM/root-level privileges.

5.) Defense Evasion – Defense evasion consists of techniques an adversary may use to evade detection or avoid other defenses. Sometimes these actions are the same as or variations of techniques in other categories that have the added benefit of subverting a particular defense or mitigation.

7.) Discovery – Discovery consists of techniques that allow the adversary to gain knowledge about the system and internal network.

When adversaries gain access to a new system, they must orient themselves to what they now have control of and what benefits operating from that system give to their current objective or overall goals during the intrusion.

8.) Lateral Movement – Lateral movement consists of techniques that enable an adversary to access and control remote systems on a network and could, but does not necessarily, include execution of tools on remote systems.

The lateral movement techniques could allow an adversary to gather information from a system without needing additional tools, such as a remote access tool.

9.) Collection – Collection consists of techniques used to identify and gather information, such as sensitive files, from a target network prior to exfiltration. This category also covers locations on a system or network where the adversary may look for information to exfiltrate.

10.) Exfiltration – Exfiltration refers to techniques and attributes that result or aid in the adversary removing files and information from a target network.

This category also covers locations on a system or network where the adversary may look for information to exfiltrate.

11.) Command and Control – The command and control tactic represents how adversaries communicate with systems under their control within a target network.

There are many ways an adversary can establish command and control with various levels of covertness, depending on system configuration and network topology.

Due to the wide degree of variation available to the adversary at the network level, only the most common factors were used to describe the differences in command and control.

Let’s see the variants of malware families which cause more noise as attack vectors in Threat Profiles. This list is not complete, just a sample of variants released.

Why should I worry about malware and their behaviors?

We should worry! Because modern have some specific ways to propagate with a complex structure of commands to accomplish for further asylum.

won’t alone, in most instances they work combine to get their work done. S