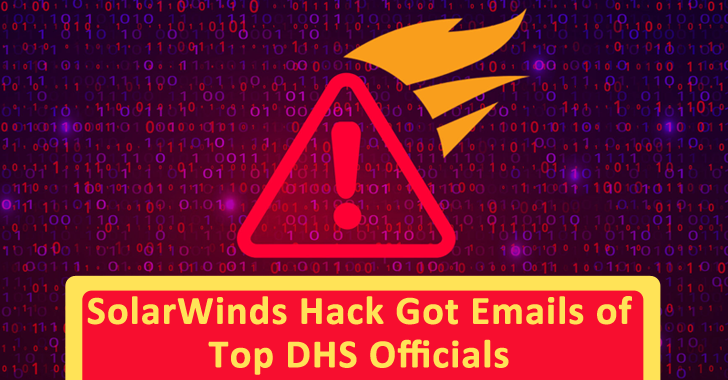 Recently, the Homeland security officials (DHS) of the US department came to the list of the victim of the SolarWinds attack. However, the  DHS is the administrative department of the United States federal government.

This department is accountable for public safety, similar to the central ministries of other countries. After a proper investigation, the cybersecurity analysts knew that the cybercriminals had gained access to the email accounts of the key members of DHS, including secretary Chad Wolf.

According to the reports, the DHS is one of the latest victims of the SolarWinds Worldwide LLC hacking attack. The agency has again reported that they have been suspecting the Russian hacking group for this attack.

The agency also asserted that the hackers had accessed the email accounts of all senior DHS officials, that also includes Chad Wolf, the secretary of Homeland Security.

The security researchers, after knowing about the attack, concluded that this complex action professes a severe risk to critical infrastructures.

And this attack also indicates that its destruction will be complex, and as time passes, there will be more victims of this attack. Moreover, in this attack, various high-profile leaders of other agencies were also targeted by the threat actors.

The list includes a member of the White House advisers and former Energy Department Secretary Dan Brouillette. Not only this, but the newly leaked information implies that all the damages were considerably worse than previously thought.

All these attacks have particularly revealed all kind of sensitive data. The analysts affirmed that the new data had not changed the policy of the White House, but the investigation is pointing that the threat actors that are responsible for this attack belong to Russia.

Which Government Agencies Were Affected?

The government agencies that were affected in the SolarWinds hacking attack were mentioned below:-

But, it’s still not confirmed that exactly how many companies and government departments have been affected or attacked by the SolarWinds hackers. But there was a report that has been stated by the cybersecurity analysts, which says that last month it was estimated that there were 18,000 companies that were attacked.

The government agencies are trying their best to circumvent all these attacks; however, the US government had agreed that a total of nine federal agencies and nearly 100 private sector companies were involved in the attack.