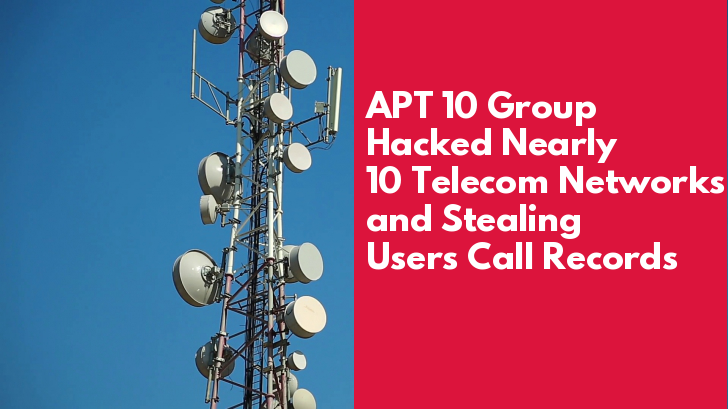 Infamous Chinese APT 10 hackers compromised over 10 Telecom networks around the world under the campaign called Operation Soft Cell and stealing various sensitive data including call records, PII, and attempting to steal all data stored in the active directory.

In 2018, Researchers from Cybereason initially identified this persistent attack that was primarily targeting the global telecommunication networks using various advanced Tools, Techniques, and procedures (TTPs) that never seen before.

Researchers refer this attack as “massive-scale” espionage which conducted against international Telecommunication Networks to steal all data stored in the active directory, compromising every single username and password in the organization, along with other personally identifiable information, billing data, call detail records, credentials, email servers, geo-location of users, and more.

Threat actors from ATP 10 involved in this massive campaign nearly past two years, and they keep on changing the attack patterns along with new activity every quarter.

How Does This Attack Start on Telecom Networks

Threat actors started gathering information about the network from the vulnerable publicly-facing server by executing a web shell.

Later, they attempted to compromise the most valuable critical assets, including Database servers, billing servers, and the active directory.

The initial indication was malicious web shell that identified on an IIS server with the process name w3wp.exe which is later confirmed that the web shell is a modified version of the China Chopper, a Web shell that initially discovered in 2012 used by Chinese threat actors to attack the enterprise web servers to gain remote access.

Threat actors launching the series of PowerShell commands on a compromised machine to enumerate the information about network architecture, users, and active directory.

PIVY is a very powerful RAT let hackers take complete control of the targeted Telecom networks machine and it has some important features including,

According to Cybereason, One of the most valuable pieces of data that telecommunications providers hold is Call Detail Records (CDRs). CDRs are a large subset of metadata that contains all details about calls, including,