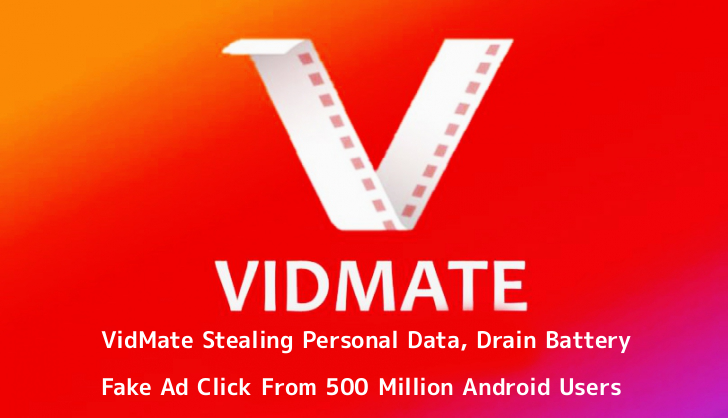 Vidmate is one of the world most popular Android Video app for download and streaming videos from popular services, including Dailymotion, Vimeo, and YouTube.

Chinese company Alibaba owns Vidmate currently not available in the Google Play store, but they are distributing through third-party store including CNET or Uptodown.

A recent research report from Upstream reveals that “VidMate subjects its users to a range of suspicious behavior that could be costing them money, draining their phone batteries, and exposing their personal information.”

It also performs other malicious activities like installs other suspicious apps without consent and collects personal users’ information using hidden software within the app.

There is 130 Million suspicious Transaction attempt by VidMate was flagged and terminated by Upstream’s security platform, Secure-D.

These attempts were initiated from 5 Million unique devices from 15 countries, and the blocked traction would cost nearly $170 if those malicious transactions weren’t terminated.

Guy Krief, the CEO of Upstream, said to buzzfeednews, “users who download and open VidMate “surrender control of their phone and personal information to a third party.”

Based on the lab test result, VidMate consumes battery life and bandwidth, eating up more than 3GB of data per month, and it leads users to pay up to $100 for mobile data.

“VidMate also collect personal information without notifying the user. This data, which included a unique number associated with a person’s phone and their IP address, was sent to servers in Singapore belonging to Nonolive, a streaming platform for gamers that is funded by Alibaba.”