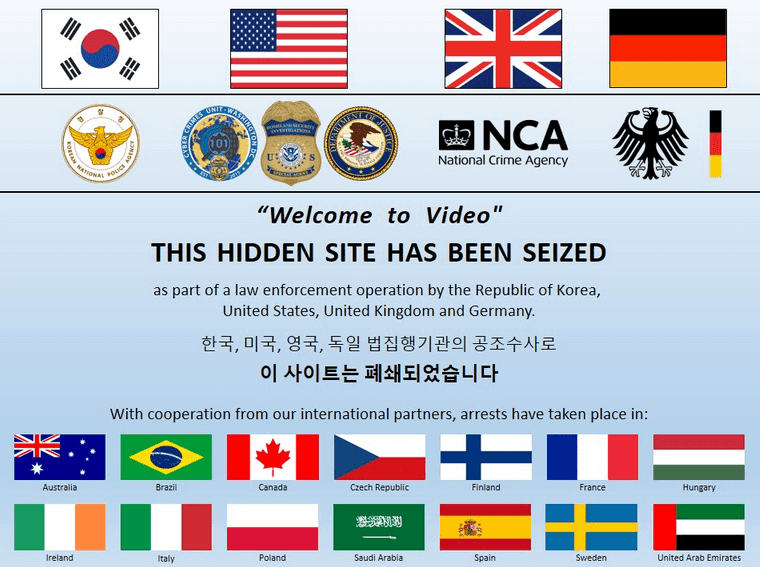 “Welcome to Video”, world’s largest child sexual exploitation darknet website has been seized and the operator (Jong Woo Son, 23) who behind the site also been charged and convicted in South Korea.

Authorities also seized approximately eight terabytes of 250,000 unique child sexual exploitation videos and the server that he used to operate a Darknet market.

It used for exclusively advertised child sexual exploitation videos that available for download by members of the site. it is one of the largest seizures so far related to this child abuse.

This operation collaborates with various countries around the world and the Son was arrested by the agents from IRS-CI, HSI, National Crime Agency in the United Kingdom, and the Korean National Police in South Korea.

According to the statement released by the Department of Justice, Not only Son but additionally 337 site users have been arrested around the world with the help of law enforcement from 38 countries, and 92 individuals were arrested from the U.S alone.

As a result of the operation, at least 23 minor victims have been rescued those who resides in the United States, Spain, United Kingdom, and these Child victims were being actively abused by the users of the site.

“Darknet sites that profit from the sexual exploitation of children are among the vilest and reprehensible forms of criminal behavior,” said Assistant Attorney General Brian A. Benczkowski of the Justice Department’s Criminal Division.

In this case, In the Washington, D.C.-metropolitan area, the operation has led to the execution of five search warrants and eight arrests of individuals who both conspired with the administrator of the site and were themselves, users of the website.  Two users of the Darknet market committed suicide subsequent to the execution of search warrants.”

Jong Woo Son, an admin of the Welcome to video website started about 2015 and is hosted in the darknet, which can be accessed only via Tor.

Based on the download details mentioned in Videos, visitors downloaded thousands of videos for more than a million times, and the users were uploaded more than 200,000 videos.

The most worst part is that the videos are taken by abusing even a 2-year-old child, and the site provides the option for users to search based on the age using keywords like “%2yo”, “%4yo” etc.

Every user needs to register and create an account to download the videos, and the customers allow them to browse images of videos preview that available to download in 3 ways.

To download the videos, customers need to get the points that can be obtained in 3 ways.

The sever behind the website was operated from the site admin bedroom and the operator failed to conceal these 2 IP addresses which were easily identified by law enforcement by just right-clicking on the website page and selecting the “view page source”.