Home Email Security What is EternalBlue? How Does it used by Cyber Criminals to Hack... 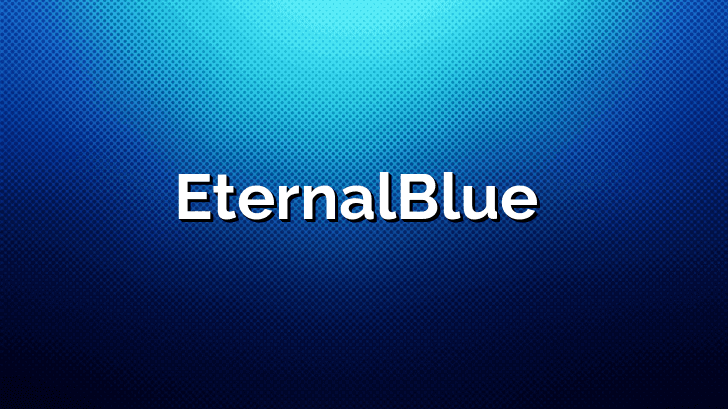 EternalBlue is a powerful exploit created by the U.S National security Agency(NSA). The tool was stolen from them in 2017, and a group calling itself the Shadow Hackers leaked it. later cybercriminals used it to penetrate Microsoft Windows-based systems.

Windows released a patch over two years ago to fix the vulnerability in their software, but not everyone has updated their computers to seal the loophole.

In fact, 2 years later over one million computers that access the internet are yet to be updated. Here’s what you need to know about EternalBlue Exploit.

The NSA had to alert Microsoft about the Windows software’s vulnerability after they realized their hacking tool had been stolen, and it was about to be used by hackers to penetrate systems using the Windows operating system.

Windows were able to prepare and issue a patch one month before the EternalBlue tool was published by the mysterious Shadow Brokers. The patch covered all Windows operating systems since Windows 2000.

Since most computers were still unpatched, various cyber actors used the tool to attack systems that were not up to date.

The WannaCry ransomware attack used the EternalBlue vulnerability to spread to over 230,000 Windows PCs worldwide. Up to date, hackers still exploit this vulnerability in unpatched computers and networks.

Consequences of the EternalBlue

EternalBlue, which is of the same family as WannaCry and Petya ransomware, cause significant damage, especially when people with malicious intent get their hands on it.

It has been used to target government agencies, organizations, institutions, large and small businesses, and individuals in over 150 countries.

In some recent cases, this cyber-weapon has been used to erase huge loads of data from Sony Pictures’ database and to steal millions of dollars from the Central Bank of Bangladesh.

In May this year, hackers used it to hold Baltimore City hostage and demanded a ransom. They froze computers, disrupted utility services, and interrupted businesses. If you are wondering how to protect your data from EternalBlue, here’s what to do:

The first step you should take is to keep your windows operating system updated, as noted by Wired.

Newly released updates contain patches to possible flaws that windows security experts have detected, and these updates can help you seal backdoors in your system that hackers may try to exploit.

To keep your system computers safe throughout, set each computer to download and deploy downloads automatically. Also, manually check if the downloads are installed. By utilizing the latest software versions, there will be no loopholes that hackers will exploit to sneak into your computers.

If you haven’t installed anti-malware on your computers, now’s the time. Find a good tool that can scan your computer and networ for any security issues, alert you on possible flaws and protect you against breaches.

A good multi-layered antivirus will detect any suspicious activity and block it before any damage occurs. Also, include firewalls to boost your security.

Training your staff can go a long way into improving your cybersecurity measures. Since 91% of cyber attacks start with a phishing email, your employees need to know how to detect suspicious emails, scrutinize links and attachments, and spot check domain names.

Also, educate everyone on how hackers deliver threats and how to react to security breaches.

Although the current and ongoing patches released by Microsoft have helped resolve the threat of EternalBlue vulnerability, we still need to remain vigilant.

EternalBlue is actively evolving, and hackers are using it together with other tools to launch attacks. By keeping your windows systems up to date, educating your staff, and deploying a powerful antivirus, you will keep cyber threats at bay.