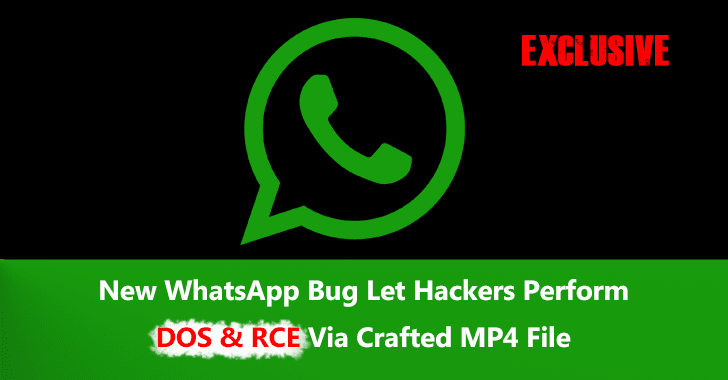 Facebook-owned privacy-oriented messenger WhatsApp is one of the Top-ranked Messanger apps with more than Billion users around the world in both Android and iPhone.

The vulnerability affected the following Versions:

The vulnerability classified as “Critical” Severity that affected an unknown code block of the component MP4 File Handler in WhatsApp.

Successful exploitation of this bug leads the manipulation as part of a Message to trigger the Stack-based memory corruption vulnerability in WhatsApp Messenger.

Hackers can take advantage of this vulnerability to deploy the malware on the user’s device to steal sensitive files and also used to surveillance purposes.

According to Facebook Advisory that published behalf of WhatsApp “A stack-based buffer overflow could be triggered in WhatsApp by sending a specially crafted MP4 file to a WhatsApp user. The issue was present in parsing the elementary stream metadata of an MP4 file and could result in a DoS or RCE.”

The RCE vulnerability allows hackers to perform the attack remotely without any sort of authentication.

The Critical WhatsApp vulnerability can be tracked as CVE-2019-11931. Based on the vulnerability severity, It defines the price range of USD $5k-$25k.

This is not the first time Remote code execution vulnerability found in WhatApp in this year, we have reported another WhatsApp RCE Vulnerability in last month that allowed remote hackers to steal the files in your Android phone using malformed GIF’s.

There is no technical details are available for this critical WhatsApp Vulnerability and an exploit is not available at this moment.

We will keep update you once we found the relevant technical details. please stay tuned.

Update: A spokesperson from WhatsApp told GBHackers that there is no evidence found for this vulnerability that was exploited.

“WhatsApp is constantly working to improve the security of our service. We make public, reports on potential issues we have fixed consistently with industry best practices. In this instance, there is no reason to believe users were impacted.”

Also Read: WhatsApp Web – A Complete Guide To Use on Windows, Mac, Linux