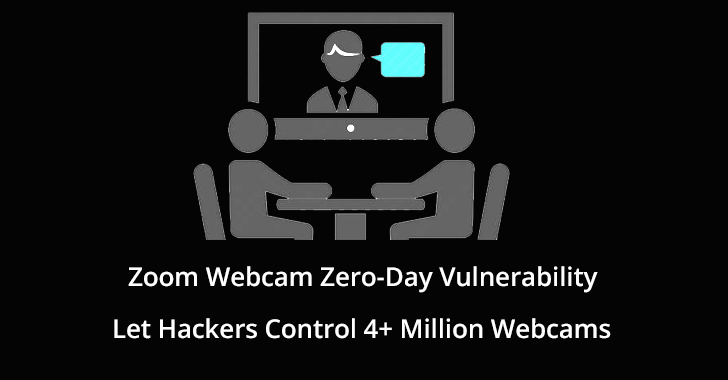 Zoom provides remote conferencing services such as video conferencing, online meetings, chat, and mobile collaboration and it’s used by 750,000 companies for their business around the world.

The vulnerability resides in the Zoom, without users permission, attackers connect to a Zoom call with their video camera activated.

This vulnerability would also allow an attacker to perform DOS (Denial of Service) a Mac using any webpage by continuously initiating an invalid call during the meeting.

An attacker can trigger this vulnerability using simple Zoom feature by just send a meeting link to the targeted victims, once the victim opens the link in their browser, Zoom client is opened on their local machine.

According to security researcher Jonathan Leitschuh, This vulnerability was originally responsibly disclosed on March 26, 2019. This initial report included a proposed description of a ‘quick fix’ Zoom could have implemented by simply changing their server logic.

“He also suggested the alternative solution by registering custom URI handlers (for example, a zoom:// URI handler) with the browsers is a more secure solution. When these URI handlers are triggered, the browser explicitly prompts the user for confirmation about opening the app.”

Leitschuh he responsibly disclosed the vulnerability to Zoom in March and also giving the company 90 days to solve the problem. According to Leitschuh’s account, Zoom doesn’t appear to have done enough to resolve the issue.

Now Zoom fixed the issue by Remove the local web server entirely, once the Zoom client has been updated which means the use of a local web server on Mac devices has been stopped and the update has been pushed to all the Mac users.

Zoom Team Also Added the new option to the Zoom menu bar that will allow users to manually and completely uninstall the Zoom client, including the local web server.

Now, Mac users getting a new menu that prompt to “uninstall Zoom”, once the user clicks on it then the old version of Zoom will be completely removed.

You may see a pop-up in Zoom to update your client or newly patched version at zoom.us/download.