Home Apple Apple to Pay Up to $1 Million For Hackers Who Can Gain... 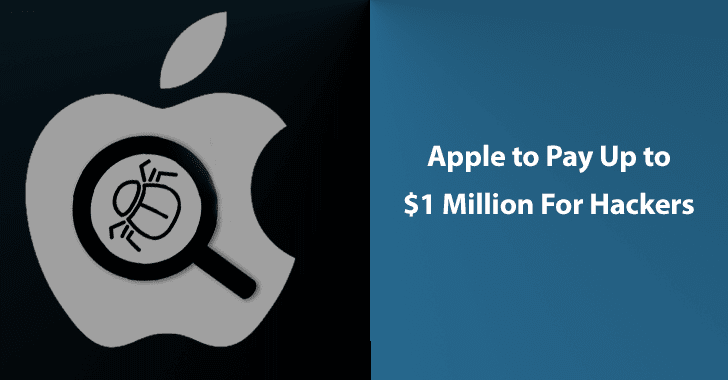 The tech giant has confirmed the expansion at Black Hat conference held in Las Vegas. Previously Apple has limited the bug bounty program only to iOS and limited researchers only can participate.

Now the Apple bug bounty program is open for all researchers and the company has increased payouts from $200,000 to $1 million.

The researchers who discover critical vulnerabilities such as zero-click full chain kernel code execution attack will get $1 million payouts and for other vulnerabilities, the rewards will be lesser. Here are the complete payout details.

Ivan Krstić, Head of Apple Security Engineering and Architecture made the announcement, he also added that the Apple special phone will be available for qualified researchers starting from next year.

These special phones are a step below the rooted devices, that lets researchers to inspect memory for vulnerabilities and to see what happens at the code level. This program was reported by Forbes earlier.

Also, the researchers who found vulnerabilities in pre-release builds are eligible to get an additional 50% bonus at the top of the category vulnerability they discover.

“This is an unprecedented fully Apple supported iOS security research platform,” Krstić said at the conference. “We want to attract exceptional researchers who have been focused on other platforms,” he added.

It was initially launched by Apple in 2016 and the company includes the only iOS as a part of the program, several researchers complained Apple failing to include other operating systems in the program, finally, the announcement came now.

The massive expansion of the Apple’s bug bounty program welcomed by bug bounty hunters and security researchers, Wardle who found many critical vulnerabilities in Apple products said that “Sure this is a win for Apple, but ultimately this a huge win for Apple’s end users.”