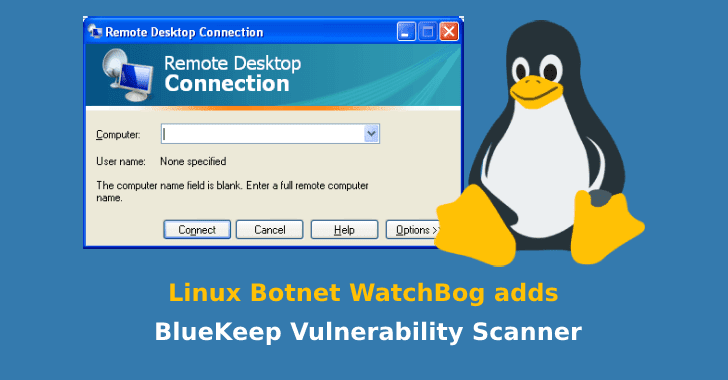 Bluekeep is windows-based vulnerability which allows an attacker to access the vulnerable machine without authentication. The vulnerability can be tracked as CVE-2019-0708, till now no attack has been spotted exploiting this vulnerability.

Once the scanning process completed it returns a list of RC4 encrypted vulnerable IP addresses encoded as a hexadecimal string.

Researchers believe that “the threat actors behind WatchBog may be gathering a list of vulnerable BlueKeep Windows endpoints for future use, or perhaps to sell to a third party to make a profit.”

To maintain persistence it utilizes crontab and downloads another spreader module – a cython combined binary(ELF executable), the binary retrieves the C2 servers from Pastebin.

Server administrators are recommended to update the software to the latest versions and to verify the open ports exists outside of the trusted network.

Linux users could check for the existence of “/tmp/.tmplassstgggzzzqpppppp12233333” file or the “/tmp/.gooobb” file, if you suspect that the system is infected.