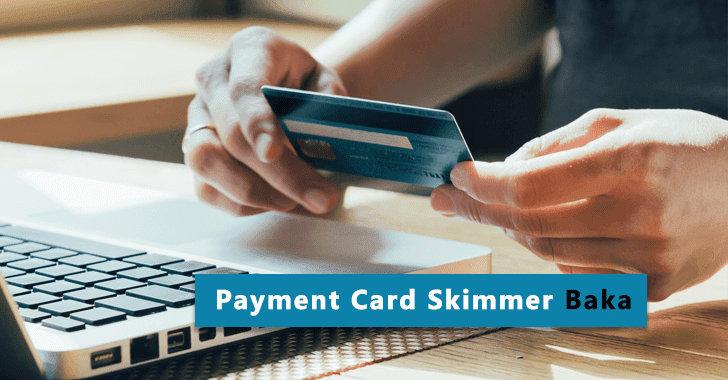 Visa warns of a new e-commerce skimmer dubbed Baka that loads malware dynamically to avoid static malware scanners and unique encryption to obfuscate the malicious code for every client.

PFD observed that seven C2 servers hosting the Baka skimming kit, the skimmer includes features that are common for an e-commerce skimmer such as data exfiltration from the target fields.

Based on its advanced design Baka believed to be created by a skilled developer, the most compelling features of the skimmer is it’s unique loader and obfuscation method.

The skimmer variant is designed to remove itself from memory when it detects any possibility of dynamic analysis with developer tools, this method is to avoid detection and analysis.

The Baka loader script works dynamically by adding a script tag to the current page that loads the remote JavaScript file.

When the user reaches the checkout page the loader executes the malicious skimming code, then it decrypts the skimming code and executes it in memory. The skimming code executes dynamically so it never present on the merchant’s server or saved to the customer’s computer.

Once the skimmer gets executed it captures the data from the checkout form, it keeps on scanning the fields for every 100 milliseconds. If it fetches the data then it sets a flag called ‘this.load’ indicating the skimmer successfully exfiltrated data.

The last process of the skimmer is cleaning up if the data is exfiltrated successfully it removes the entire skimming code from memory to avoid detection.

Visa asks merchants to regularly scan and test eCommerce sites for vulnerabilities or malware, ensure shopping carts, other services, and all software are upgraded or patched.