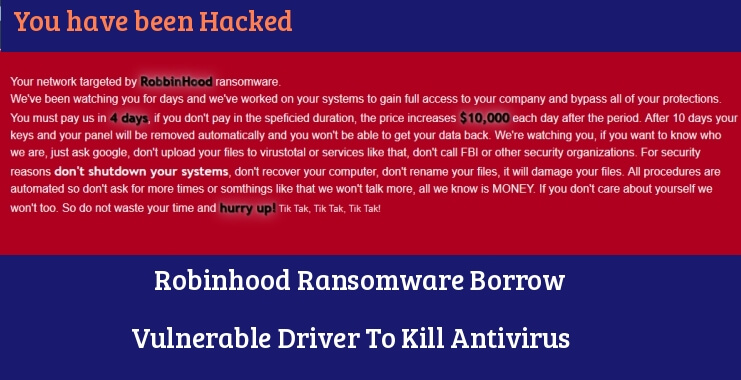 Attackers using the Living off the Land technique for this ransomware attack to destructive file encryption portion and they are using Gigabyte driver vulnerability tracked as CVE-2018-19320.

Living off the land tactics is the use of operating system features or legitimate network administration tools or drivers to compromise victims’ networks.

During the attack, the Gigabyte driver used by them to load an unsigned driver into Windows to bypass the security protection and killing the security software process.

Researchers from Sophos said ” This is the first time we have observed ransomware shipping a trusted, signed (yet vulnerable) third party driver to patch the Windows kernel in-memory, load their own unsigned malicious driver, and take out security applications from kernel space”

Samples of this ransomware reveal that the attackers using several files embedded in STEEL.EXE and is extracted to C:\WINDOWS\TEMP.

Following list of files that performing various operations during the infection.

STEEL.EXE – The Kill application that kills the processes and files of security products, using kernel drivers.

ROBNR.EXE – A driver installer that deploys both the benign, signed third-party driver and the criminals’ unsigned kernel driver.

RBNL.SYS – Malicious kernel driver that can kill processes and delete files from the kernel space.

These malicious drivers have various ways to delete files, but it doesn’t choose only one way to perform this task, instead, it runs them all sequentially, to ensure the file gets deleted.

Once its deleted the files,  STEEL.EXE kills all the processes associated with the files and displays the following ransomware notes.

Eventually, all the files in the compromised systems will be locked with strong encryption and demand the $10, 000 ransom in bitcoin.

Also, the ransomware notes displayed, the link will be provided to unlock the device by getting the private key, and they also warned not to contact the FBI and other security organizations.