Home Android Beware!! 25 Malicious Apps with Over 2.1 Million Downloads Found in the... 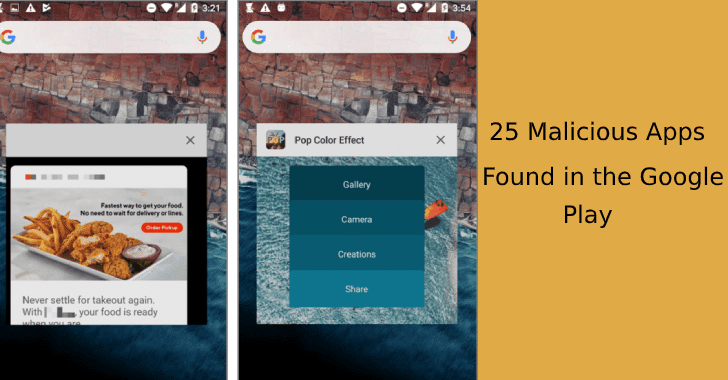 All the 25 malicious apps are published form 22 different developer accounts, but all the apps have similar structure and content. This indicates the developers of the app are from the same group and developed the script from the same code base.

Once the app installed it displays an icon on the screen, if opened then it downloads a remote configuration file from third-party service without user consent. The configuration file contains settings that “can toggle the app’s icon-hiding behavior, as well as other advertisement-related settings.”

The downloaded malware extracts the settings and applies to the app. The malware code contains keywords “such as “app_hideIcon” in the case of the icon-hiding feature, are encoded and encrypted. To avoid detection by antivirus scanners.”

Once the app icon got hidden from the device screen it starts displaying advertisements, these advertisements continue to show even the app is closed.

“Full-screen advertisements are displayed at random intervals with no app title registered in the advertisement window, so users have no way of knowing which app is responsible for the behavior.”

These illicit apps generate revenue to its developers by infecting the user’s device, they generate ads randomly which makes hard for end-users to determine which app is responsible for it.

To play more stealthy, one developer published two identical apps in the store one is the clean and the second one packed with malicious code. In another scenario, they created a malicious copy of the trending apps.

“Unlike the previously hidden app malware we discovered, this batch does not have the icon-hiding function hardcoded in the APK. Instead, the switch is controlled remotely via the downloaded configuration file, allowing the malware developer to evade Google Play’s rigorous security testing.”