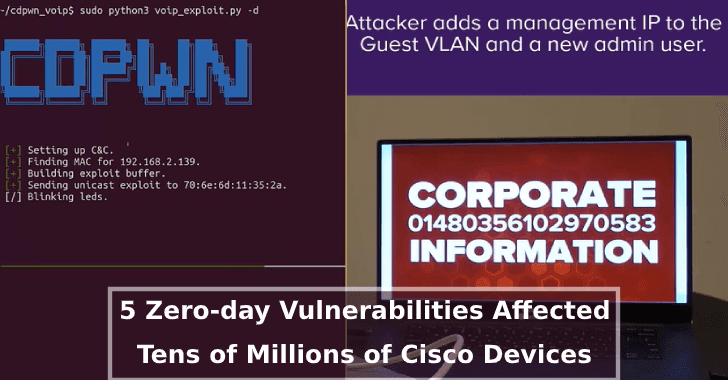 Cisco Discovery Protocol is also known as CDP is the Cisco proprietary Layer 2 (Data Link Layer) network protocol and is virtually implemented in Cisco products including switches, routers, IP phones, and cameras to discover the information about the Cisco equipment.

Four of the five vulnerabilities are remote code execution (RCE) vulnerabilities that affected 10 of millions of users, and it allows attackers to completely take over the vulnerable devices without any sort of user interaction.

Several Enterprise devices are affected by these Zero-day vulnerabilities, and the successful exploitation of these vulnerabilities causes severe damages in tens of millions of enterprise network devices.

Attackers can exploit all four vulnerabilities that affect a separate implementation of the CDP parsing mechanism by sending maliciously crafted CDP packet to the targeted Cisco devices.

A Stack overflow vulnerability in the parsing of CDP packets that affected the Cisco NX-OS software allows attackers to trigger due to a CDP packet containing too many PoE( Power over Ethernet) request fields.

Attacker causing te Stack overflow by sending a legitimate CDP packet with more power levels than the total number of power levels the switch expects to receive, thus it gives full control over the switch and the network infrastructure.

In this vulnerability, a stack overflow in the parsing function for the Port ID, can be exploited to gain code execution on the phone.

Attackers trigger this vulnerability in IP Phone by sending the maliciously crafted CDP packet directly from within the access switch to which target devices.

According to Armis research ” since broadcast CDP packets are also interpreted as legitimate CDP packets by the IP phones, an attacker could send an ethernet broadcast packet, that will trigger the vulnerability and cause DoS on all vulnerable devices on the same LAN, simultaneously. “

A format string vulnerability occurs when parsing of certain string fields such as device ID, port ID for incoming CDP packets in the CDP implementation in IOS XR.

In this case, Attacker to control the format string parameter which leads to stack overflow thus attacker perform remote code execution and gain full control over the target router.

How Dangerous These Vulnerabilities are:

According to Armis report, Exploitation of the dubbed CDPwn RCE vulnerabilities can lead to:

Cisco fixed all these vulnerabilities and issue a patch for the affected devices.

Enterprise users are advised to quickly apply the patch for the affected Cisco products.