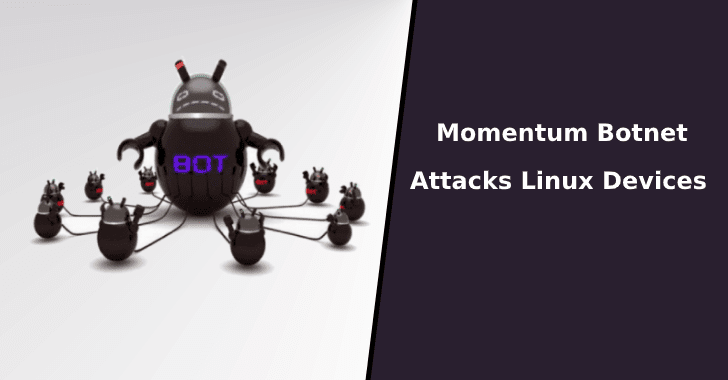 The malware campaign targets to install a backdoor on the Linux platform that accepts commands from attackers server to conduct various types of DoS attacks against a given target.

The Momentum botnet targets the Linux platform running on various CPU architectures such as ARM, MIPS, Intel, Motorola 68020, and more. Mirai, Kaiten, and Bashlite are the backdoor variants distributed by the Momentum botnet.

The botnet exploits various vulnerabilities on the targeted router devices and web services to deploy and execute PowerShell scripts.

Once the botnet infects the device it modified run commands config file “rc” and adds them to command and control (C&C) server through internet relay chat (IRC) channel.

Then the infected device gets connected with the distribution server, it uses various commands to launch 36 different methods using the compromised devices.

The botnet is also capable of “opening a proxy on a port on a specified IP, changing the nick of the client, disabling or enabling packeting from the client, and more.”

With LDAP DDoS reflection, Memcache attack the botnet spoofs the source IP address and with UDP-BYPASS attack targets the host by constructing and unloading a legitimate UDP payload on a specific port.

The Momentum botnet includes other capabilities such as Fast flux, Backdoor and Propagate to spread and compromise devices.