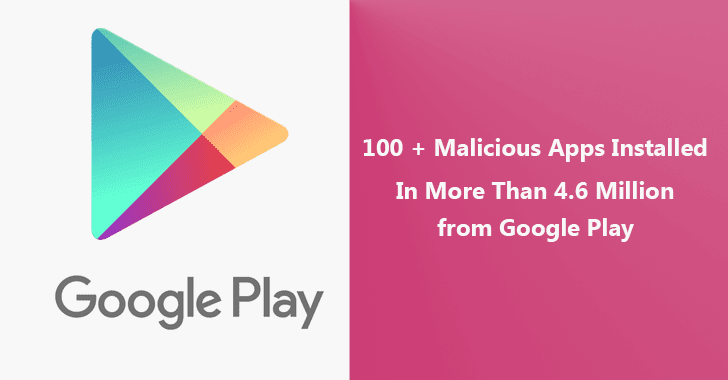 Researchers discovered over 100 malicious apps from Google play store that downloaded by more than 4.6 android users around the globe.

“GBHackers on Security” reported several adware incidents in the past few months, and it’s rapidly growing to exclusively target the Android users to generate millions of dollars revenue.

Malware, Spyware, and Adware can accompany them, become a parasite in user’s systems resulting in unnecessary disruptions, and breaches of the personal data in your Android devices.

In addition to the Soraka code package, Researchers also discovered, in some of the apps, a variant with similar functionality which we dubbed “Sogo” (com.android.sogolibrary.*):

Some of The Malicious Apps Activities

This apps contains more than 170,000 downloads with no Anti-Virus (AV) detections on VirusTotal.

In the ad fraud activities, Upon unlocking the device, the app code removes the background notification service that halts all fraud activity while the phone screen is off and the first Out-of-Context (OOC) ad is rendered a couple of seconds after the device is unlocked.

“This mechanism also allows fine-grain control of who (or what) receives the ad fraud, using the controls of ad serving platforms. The apps render out-of-context ads when the filter conditions are appropriate.”

The White Ops Threat Intelligence team said that they continue to monitor these packages and will identify any emerging packages.