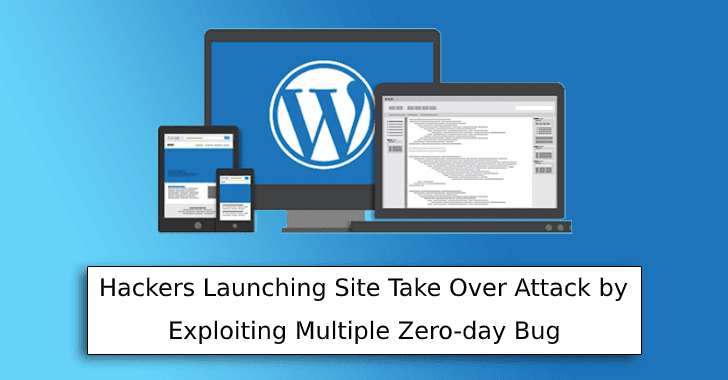 3 popular WordPress plug-ins are exploited as a part of this ongoing site take over attack campaign.

This campaign mainly targeting the WordPress websites and exploiting the multiple XSS vulnerabilities in the above vulnerable plugs to inject the malicious javascript.

Cross-site scripting (XSS) vulnerability let an attacker inject untrusted snippets of JavaScript into your application without validation. This JavaScript is then executed by the victim who is visiting the target site.

In results, Attackers create a rogue administrator account to infect with a site with the backdoor for future attacks.

Another Stored XSS vulnerability in one of the above Plugin Async JavaScript let attackers inject with a crafted payload to execute malicious JavaScript when a WordPress administrator views certain areas of their dashboard.

Async Javascript plugin is currently installed on more than 100,000 WordPress sites and the Author Frank Goossens, quickly released a patch for this issue after the issues reported by Wordfence researchers.

According to Wordfence report ” The vulnerability in 10Web Map Builder exists in the plugin’s setup process. The plugin’s setup functions are called during admin_init which, like Flexible Checkout Fields, is accessible to unauthenticated users. If an attacker injects malicious JavaScript into certain settings values, that code will execute for administrators in their dashboard as well as front-of-site visitors in some circumstances.”

10Web Map Builder for Google Maps urges users to update to version 1.0.64 as soon as possible.

Researchers observed that Modern Events Calendar Lite registers several AJAX actions for login in users that allowed low privileged users such as a subscriber to manipulate the data and they can be injected with various XSS payloads.

It depends on where the attacker injecting the code and this campaign currently targeting administrators to create rogue accounts for the attackers.

This vulnerability has been fixed now. Update to version 5.1.7 as soon as possible.